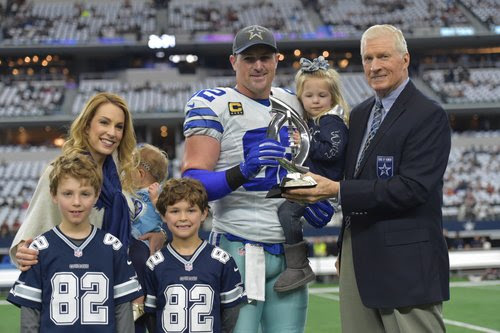 WACO — The Texas Sports Hall of Fame in Waco will induct 11-time NFL Pro Bowler Jason Witten into the distinguished hall of sports legends on March 30.

An Elizabethton, Tennessee native, Witten played collegiate football at the University of Tennessee, where he earned honors such as USA Today’s Player of the Year and All-American as well as being the runner-up for the “Mr. Football” award. In addition, Witten was Academic All-Southeastern Conference as he led the conference’s tight ends in receiving and reception yards.

After his college career, Witten was drafted to the Dallas Cowboys, where he was named to the NFL All-Rookie team.

For his career, Witten caught 1,152 passes for 12,448 yards and had 68 touchdowns. At the time of his retirement from professional football in 2018, Witten ranked fourth on the NFL’s All-Time reception list and second among tight ends, behind Tony Gonzalez. In addition, he ranks at No. 21 on the NFL’s all-time reception yardage list.

He is the Cowboys’ all-time leader for receiving yards at 12,448 yards. He also holds the record for most consecutive games as a starting player at 229 games; most consecutive seasons with a touchdown reception (15); and most games played in Dallas Cowboys’ history (239 games).

Witten is tied with Dallas Cowboys legend Bob Lilly (also a Texas Sports Hall of Fame member) for the franchise record in Pro Bowl selections with 11. Witten was named All Pro twice, in 2007 and 2010. The only time Witten missed a game in his 14 years of playing professionally was when he suffered from a broken jaw.

Witten and his wife, Michelle, also founded the Jason Witten Score Foundation, which seeks to prevent domestic violence. They remain active in the foundation today.

In addition, Witten created the Jason Witten Collegiate Man of the Year Award, which is presented to a Division 1 college football player who demonstrates a record of leadership with their team by exhibiting exceptional courage, integrity and sportsmanship both on and off the field

Witten named the Walter Payton NFL Man of the Year in 2012. He currently serves as an analyst for ESPN’s Monday Night Football.

About the Texas Sports Hall of Fame:
The Texas Sports Hall of Fame and Museum, located in Waco, chronicles the heroes and legends of the Lone Star State sports at all levels, including high school standouts, Olympians and professionals. Opened in Waco at its current site in 1993, the organization’s mission is to preserve the legacies of all inductees and the history of sports in Texas to educate and inspire guests of all ages. Home to over 300 Texas legends, the museum houses Texas Tennis Museum and Hall of Fame and Texas High School Football Hall of Fame. For more information, please visit http://www.tshof.org/.